Is neon underglow legal in Alaska?

Alaska law does not restrict additional aftermarket vehicle lighting which would include neon underglow. Therefore it’s our conclusion that in Alaska neon underglow is not illegal, as long as you follow these restrictions:

We also highly recommend avoiding any combination of red and white colors on any aftermarket lights including underbody glow, as these colors are used on emergency vehicles.

There are no relevant AK laws which specifically restrict or prohibit installing car underglow, meaning we consider it legal to use it while driving.

Below are all relevant excerpts from Alaska Vehicle Code that limit, restrict or allow certain aftermarket lights to be installed on vehicles.

[…] (h) Lights displaying blue color may not be used upon vehicles […]

(b) Except as provided in secs. 37, 40, and 90 – 100 of this chapter, no person may drive or move a vehicle upon a highway displaying (1) a red light visible from directly in front of the center of the vehicle; (2) a flashing or rotating light; or (3) an alternately flashing light. […]

(e) A lighting device or reflector mounted on the rear of a vehicle must display or reflect a red color, except the stop light or other signal device which may be red or yellow, and the light illuminating the registration plate and the light emitted by backup lights must be white. No backup light may be turned on when the vehicle is in forward motion.

(f) No person may operate a motor vehicle on a roadway with any color of light illuminated other than colors specified in this chapter.

Section 145 above states that no colors other than whose specified by Vehicle Equipment chapter are permitted. 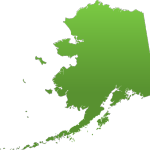 Alaska is a state in the United States, situated in the northwest extremity of the North American continent, with the international boundary with Canada to the east, the Arctic Ocean to the north, and the Pacific Ocean to the west and south, with Russia further west across the Bering Strait. Alaska is the largest state in the United States by area, the 4th least populous and the least densely populated of the 50 United States. Approximately half of Alaska's 731,449 residents live within the Anchorage metropolitan area. Alaska's economy is dominated by the oil, natural gas, and fishing industries; it has these resources in abundance.

Have questions about traffic or neon glow laws in Alaska?