New Hampshire law does not mention additional allowed or restricted vehicle lighting which would include neon underglow. Therefore it’s our conclusion that in New Hampshire neon underglow is not illegal, but ensure you avoid the following restrictions:

Although not specifically prohibited unless it’s a restricted color, flashing lights are technically not prohibited but we strongly suggest never using them. Any flashing, rotating or oscillating light can be considered a distraction to other drivers and may be subject to other laws and regulations.

We also highly recommend avoiding purple or violet color on any aftermarket lights including underbody glow.

There are no relevant NH laws which specifically restrict or prohibit installing car underglow, meaning we consider it legal to use it while driving.

Below are all relevant excerpts from New Hampshire Vehicle Code that limit, restrict or allow certain aftermarket lights or colors to be installed on vehicles.

Every motor vehicle and trailer or any combination of vehicles, when on the ways of this state at night, shall have on the rear thereof, and to the left of the axis thereof, one lamp, displaying a red light visible for a distance of at least 1000 feet to the rear of such vehicle, and a white light illuminating the registration plate of such vehicle so that the characters thereon shall be visible for a distance of at least 50 feet, except that passenger cars manufactured or assembled after January 1, 1952, shall have at least 2 tail lamps, one to either side of the axis thereof.

I. In this section:

I. No person other than a sworn law enforcement officer with power of arrest shall operate a vehicle equipped with blue colored light […]

No person other than those authorized in this section or in RSA 266:78-c shall operate a vehicle equipped with amber colored warning lights. […]

Violation for using emergency and warning lights is punishable by the following section: 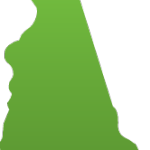 New Hampshire is a state in the New England region of the northeastern United States of America. The state was named after the southern English county of Hampshire. It is bordered by Massachusetts to the south, Vermont to the west, Maine and the Atlantic Ocean to the east, and the Canadian province of Quebec to the north. New Hampshire is the 5th smallest and the 9th least populous of the 50 United States.

Have questions about traffic or neon glow laws in New Hampshire?